Trafalgar Square in London is a popular tourist hotspot - over 15 million tourists visit this public square every year. It is among the 10 most visited tourist attractions in London and the square is an epicentre for the city's festivities and always draws in countless visitors. 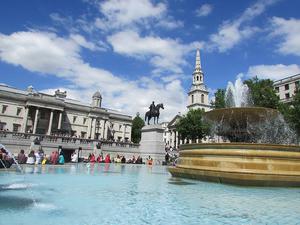 Getting to Trafalgar Square

Trafalgar Square is mostly accessible at all times. Taking the Tube is the best option to reach this destination. Charing Cross, which is on the Bakerloo and Northern lines, is the closest Tube station, with an entrance-and-exit on Trafalgar Square. Apart from which, tourists can also use stations including Leicester Square (Northern and Piccadilly lines), Embankment (Bakerloo, Northern, District and Circle lines), Piccadilly Circus (Bakerloo and Piccadilly lines), which are at a walk’s distance. Taking the bus or mainline rail station are alternative options.

What makes Trafalgar Square truly special is that it hosts a variety of events, performances and celebrations throughout the year. The best time to visit would be around Christmas, when there are plenty of seasonal festivities. You’d love the massive 20-metre Norway spruce at the square in the backdrop of carolling and Christmas festivities. The annual firework event for New Year’s Eve at the square is yet another not-to-be-missed event. There are numerous events planned like St. Patrick's Day and the Pride in London Parade, which make the square a lively place-to-visit.

The city is quite safe, however, some areas attract pickpockets who take advantage of the crowds on the city's streets. The city is also safe for women travelling alone. As one of the top tourist destination, there are always certain risks, and here are some simple precautions that can ensure a safe stay:
• Keep your belongings always out of sight at bars and restaurants and in taxis/cars.
• Avoid accepting food or drinks from strangers.
• Avoid leaving your belongings unattended.
• Avoid carrying too much cash.
• Only use taxis or registered minicabs.
• Avoid walking alone at night.
• Stay alert on crowded Tube (subway) or buses.

Tipping in London's restaurants will vary depending on whether it is a seated service or self-service. In the case, you're doing the waiting, carrying for yourself, and standing, then you will not need to give your server a tip. However, many such cafes will have a tip jar on the counter, where you can give the tip of your choice. In the case of a seated service, it is customary to leave 10-15% of the bill when eating out. In the context of tipping tour guides, you can tip depending on the quality of the service.